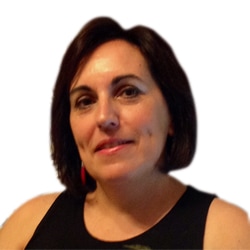 Mercedes Díez Prados is full Professor at Alcalá University (Madrid), Spain. Her research fields and publications deal with diverse areas of linguistics, particularly at the discursive and pragmatic levels: TEFL (specifically, writing in English as a foreign language), anglicisms, language and gender, evidentiality, evaluation, and persuasion. In the mid-nineties (1996), she co-authored some textbooks for teaching English in Secondary Education in Spain (Edelvives). Her main study on the use of cohesive and coherence devices in texts written by Spanish university students was published in 2003 in the book entitled Coherencia y Cohesión en Textos Escritos en Inglés por Alumnos de Filología Inglesa (Estudio Empírico).
Regarding the use of loanwords in English for Specific Purposes, the most wide-ranging publication in which Dr. Díez has contributed is that of “English Loanwords in Spanish computer language” in the journal English for Specific Purposes (2007). As for publications dealing with gender influence on language use, some are: “El lenguaje dirigido a las mujeres frente al lenguaje dirigido a los hombres: ¿Igual o diferente?” (1999), “Kimmy y Jules: Dos estereotipos de mujer en ‘My Best Friend’s Wedding’” (1999, co-authored with María Rosa Cabellos), “Women and language in female magazines” (co-authored with María Rosa Cabellos 2000), “Gender and L1 influence on EFL learners’ lexicon” (2010) and “Enforcing gender in adolescents via directives in teenzines: A contrastive view in English and Spanish” (2014). As a result of her participation in the research group SPICLE, she has co-authored several works of international scope published by John Benjamins Publishing Co., Rodopi and Peter Lang on the topic of evidentiality and writer stance in texts written by both novice and expert writers, native and non-native speakers of English; among these: “Evidentiality and the construction of writer stance in native and non-native texts” (2003), “Contrasting learner corpora: The use of modal and reporting verbs in the expression of writer stance” (2003), “The expression of writer stance in native and non-native argumentative texts” (2004), “Formulating writer stance: A contrastive study of EFL learner corpora” (2004).

She has also participated in eighteen research national and international projects, the most recent ones being the one directed by Dr. Laura Alba entitled ‘Funciones Discursivas: la Evaluación en distintos Tipos Textuales (FUNDETT)’ and the one she directs at present called “Emotion and Language ‘at Work’: The Discursive Emotive/Evaluative Function in Different Texts and Contexts within Corporate and Institutional Work: Project Persuasion” (EMO-FUNDETT: PROPER). Her most recent publications are those co-authored with the also FUNDETT member Ana Belén Cabrejas: “The evaluative function of cohesive devices in three political texts” (2013, published by De Gruyter Mouton) and “Positive self-evaluation versus negative other-evaluation in the political genre of pre-election debates” (2014, published in the journal Discourse & Society).